The NASA/ESA Hubble Space Telescope recently took this amazing photo of Jupiter reveals a smaller-than-usual Great Red Spot and an intense color palette in Jupiter’s swirling clouds. The Great Red Spot, one of our solar system’s most famous features, would have appeared to be slowly unraveling.That spot, which is actually a storm, has lasted 150 years that we know of.

NASA said, “The colors, and their changes, provide important clues to ongoing processes in Jupiter’s atmosphere.”

NASA and Space Telescope Science Institute in Baltimore released this new Hubble Space Telescope view of Jupiter on (August 8, 2019). The telescope acquired the image on June 27. It’s reminiscent of some spacecraft images. The most amazing features in the image, are the rich colors of the clouds moving toward the Great Red Spot.


The Great Red Spot is a vast storm, which has been seen raging on Jupiter for hundreds of years and is roughly the diameter of Earth and is rolling counterclockwise between two bands of clouds, that are moving in opposite directions toward it.Much smaller storms appear on Jupiter as white or brown ovals that can last as little as a few hours or stretch on for centuries.

Researchers have observed cyclones with a wide variety of different appearances across the planet. The two white oval features are anticyclones, similar to small versions of the Great Red Spot. 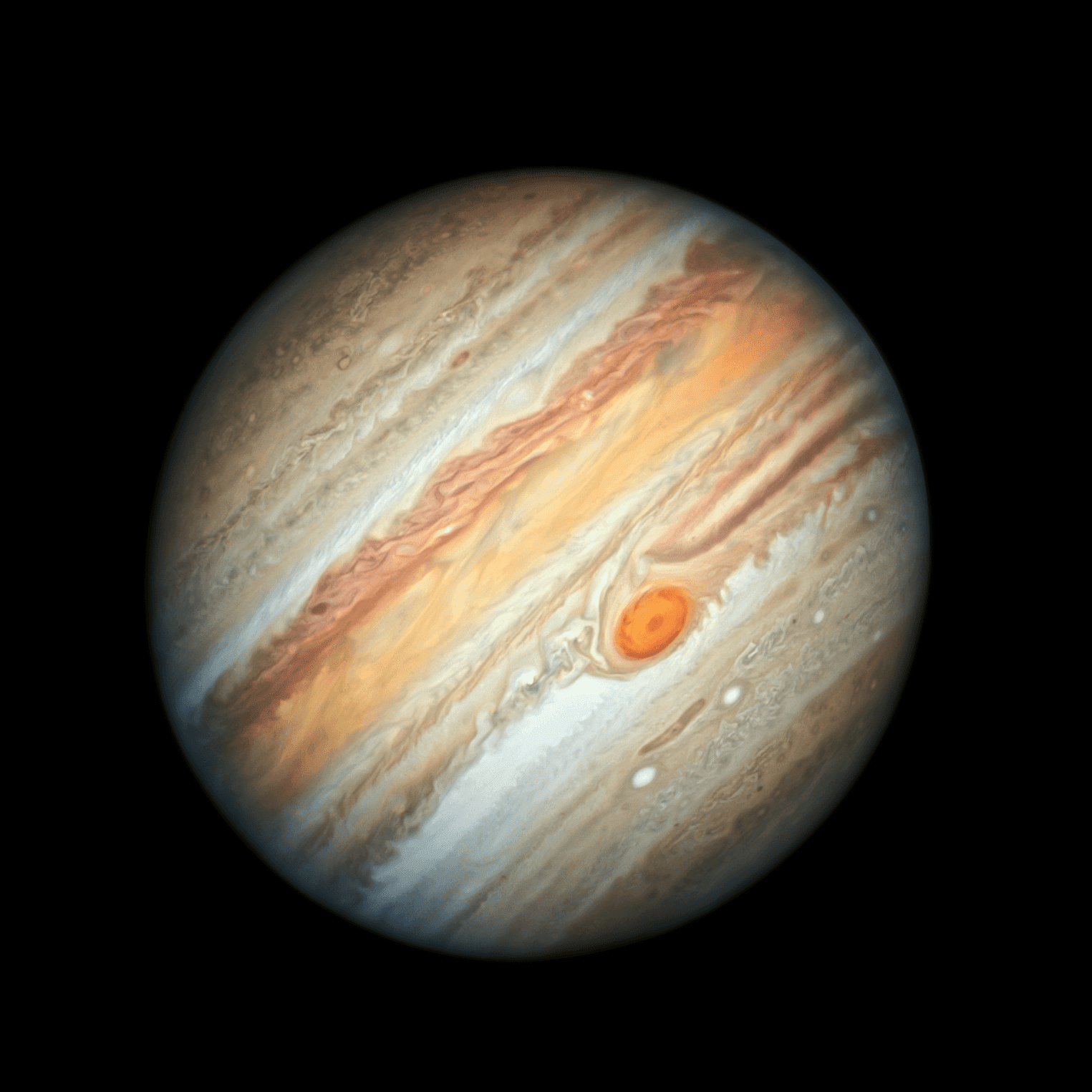 “This new Hubble Space Telescope view of Jupiter, taken on June 27, 2019, reveals the giant planet’s trademark Great Red Spot, and a more intense color palette in the clouds swirling in Jupiter’s turbulent atmosphere than seen in previous years. The colors, and their changes, provide important clues to ongoing processes in Jupiter’s atmosphere.

The bands are created by differences in the thickness and height of the ammonia ice clouds. The colorful bands, which flow in opposite directions at various latitudes, result from different atmospheric pressures. Lighter bands rise higher and have thicker clouds than the darker bands.

All of Jupiter’s colorful cloud bands in this image are confined to the north and south by jet streams that remain constant, even when the bands change color. The bands are all separated by winds that can reach speeds of up to 400 miles (644 kilometers) per hour.

On the opposite side of the planet,the band of deep red color northeast of the Great Red Spot and the bright white band to the southeast of it become much fainter. The swirling filaments seen around the outer edge of the red super storm are high-altitude clouds that are being pulled in and around it.

The Great Red Spot is a towering structure shaped like a wedding cake, whose upper haze layer extends more than 3 miles (5 kilometers) higher than clouds in other areas. The gigantic structure, with a diameter slightly larger than Earth’s, is a high-pressure wind system called an anticyclone that has been slowly downsizing since the 1800s. The reason for this change in size is still unknown.

A worm-shaped feature located below the Great Red Spot is a cyclone, a vortex around a low-pressure area with winds spinning in the opposite direction from the Red Spot. Researchers have observed cyclones with a wide variety of different appearances across the planet. The two white oval-shaped features are anticyclones, like small versions of the Great Red Spot.

Another interesting detail is the color of the wide band at the equator. The bright orange color may be a sign that deeper clouds are starting to clear out, emphasizing red particles in the overlying haze.

The new image was taken in visible light as part of the Outer Planets Atmospheres Legacy program, or OPAL. The program provides yearly Hubble global views of the outer planets to look for changes in their storms, winds, and clouds.

Hubble’s Wide Field Camera 3 observed Jupiter when the planet was 400 million miles from Earth, when Jupiter was near “opposition” or almost directly opposite the Sun in the sky.”