Samsung’s Galaxy Book 2 is finally official – it’s a Microsoft Surface Pro competitor, and has been powered by a Qualcomm SoC this time.

The 2-in-1 tablet is going to ship with a Samsung-signature S Pen and a keyboard, and does pretty much everything you’d expect it to. However, one of the big changes is that the tablet is powered by a Snapdragon 850, which is actually a mobile processor with great power efficiency.
Oh and unlike the Galaxy Tab 4, this one runs Windows, and is meant to be a portable business-oriented computer. Its predecessor had an Intel Core m3 chipset instead.
Well, let’s talk about its design and display first.
Work tablet designs are usually bland, and pretty much minimal. These devices are made with ergonomics, portability, and modernness in mind, rather than luxuriousness. They are designed mainly for commercial use, to be a compact computer that can be taken anywhere, and placed anywhere, from offices to coffee shop tables while still looking good.
The Galaxy Book 2 has an aluminum body, with a keyboard that attaches at an angle for a better typing experience. Its keys have been designed to be silent and roomy, for a comfortable typing experience. It also has a pre-built kickstand on the rear.
As for the display, Samsung used a 12-inch AMOLED panel which has a 1440 x 2160 resolution. 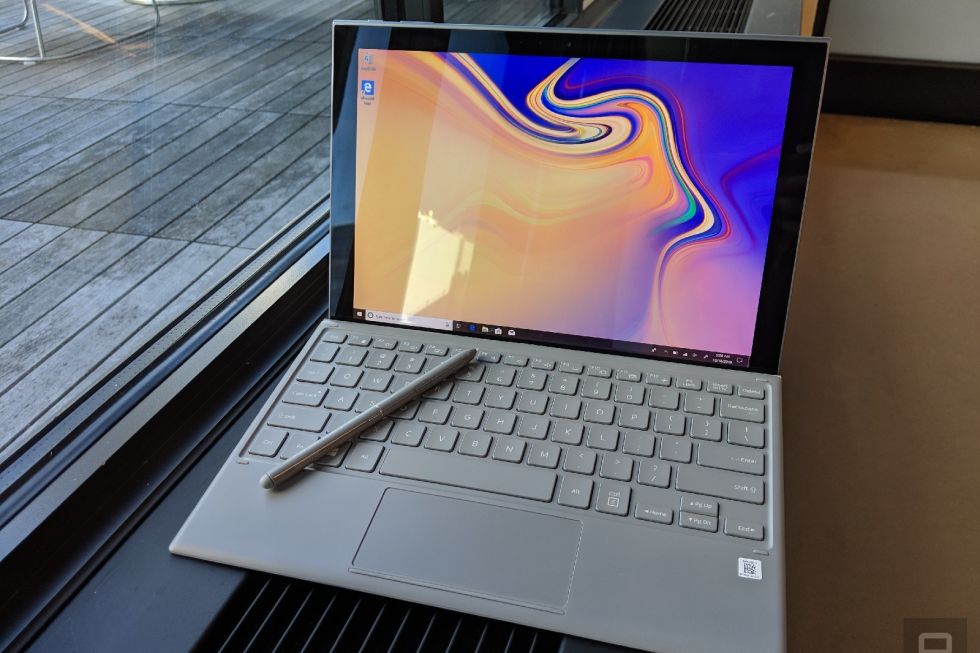 The main highlights, however, are not visible on the outside, but rather inside. Galaxy Book 2 has a powerful Snapdragon 850 chipset, that supports a super-fast LTE radio, something not present in rivaling tablets. Samsung says that “LTE connectivity is really at the center of this device”, thanks to its Snapdragon X20 modem.
Another attribute is its high battery life. A mobile-size Snapdragon chipset can do wonders when it comes to saving battery life, as it’s been designed to run in mobile devices that have small batteries. Samsung says that the tablet has an impressive 20-hour battery life, which is not possible with Intel processors in a tablet.
However, there’s a catch – the tablet ships with Windows 10 S (not the full desktop version), and the 20-hour battery life might only be possible on the original operating system that the Galaxy Book 2 shipped with. You can, however, upgrade to the full desktop version for free whenever you want, but it will surely compromise battery performance.
The good thing is that it has a headphone jack, in addition to two separate USB Type-C ports. To expand storage, you can also plug in a microSD card. And as mentioned before, keyboard and S Pen are included with the package so you won’t have to buy them separately.
Galaxy Book2 will hit the markets on November 2, starting at a price of $1,000 which is a bit too high for a glorified tablet/laptop convertible.