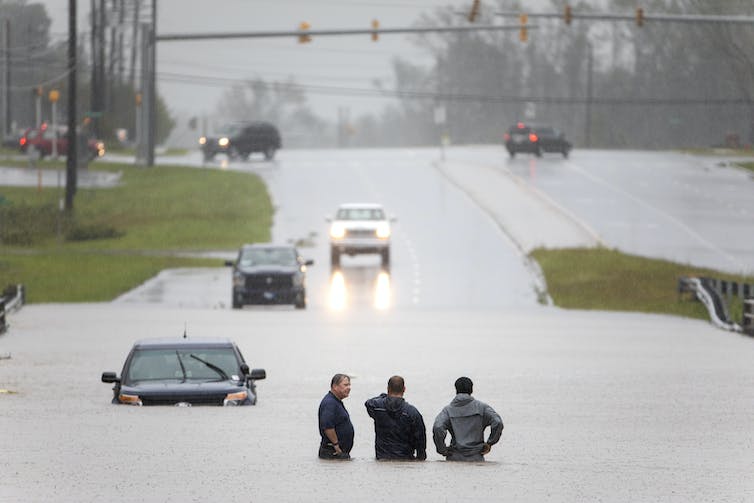 Roger Wang, University of Dundee
Residents are struggling with the aftermath of Hurricane Florence, a record-breaking storm that has hit the US east coast and led to at least 32 deaths, floods and damaged homes. Meanwhile, Typhoon Mangkhut has been ravaging southern China. More than three million people were evacuated.

In the last few years, AI has become ever more powerful. It can diagnose diseases, book restaurants, fake presidential speeches, and even compose hit music and produce trailers for horror movies. So in this new era of “big data” and “artificial intelligence”, do we have new tools to protect our society and manage the damage of such storms?

AI demonstrated a superior ability to understand certain situations in 2016, when the programme AlphaGo beat Lee Sedol, 18-time world champion, at the game Go, the most sophisticated game in history. But is this superior capability seen elsewhere, too? Could, for example, AI understand, predict and manage natural disasters – such as floods – better than humans can?

A computer game and a flood are obviously two very different things. But AI is catching up humans in understanding “things”. For example, researchers recently demonstrated that AI could help diagnose breast tumours from the medical imaging. And more preliminary research is showing that AI could definitely help us monitor floods and could perhaps even deliver more accurate early warning messages in the near future.

In a recently published paper, I describe how I used two of the most popular AI techniques to monitor tweets and photos streamed from Twitter and a mobile app called MyCoast. These AI-based algorithms can identify the location mentioned in a tweet about flooding and describe the content of the photos to recognise flood scenes through intensive training with “worked examples”, photos manually labelled by humans using keywords. After such training, the trained AI could make a prediction about whether a new photo is a flood scene or not.

Diagnosing breast tumours and identifying floods is, of course, something that humans can do. But AI can up the potential of such human capability by a major scale. An AI programme, for example, can read thousands of tweets and photos in seconds. In addition, AI does not tire – its judgement is kept at the same level all the time. In comparison, human judgements are subjective, changing due to decreasing concentration and fluctuating emotions. So yes, AI is much more powerful than humans in these aspects, especially in terms of speed and volume.

So should we be worried about this power? Many argue that we should worry about AI using natural disasters to destroy human society, as imagined in the recent movie Geostorm. Technology tycoon Elon Musk has also spoken of AI posing an “existential risk” to humans. But it is important to note that AI cannot compete with humans, at least in the foreseeable future, in many other areas.
First, AI is a mimicking algorithm of human judgements. AI is better than humans in terms of speed and volume, but not in terms of quality. This is especially true of flood monitoring. My research demonstrated that AI could make mistakes in recognising flood scenes. However, this situation might change in the future, as it did in the case of the game Go. As more training datasets become available, the accuracy and reliability of AI’s predictions will be further improved.

Second, AI is still weak when it comes to prediction. Although these algorithms can make acceptable forecasts within the scope of the past, predictions become wild when they go beyond the parameters of the training data. Say you are given a series of points to connect with a line. It’s relatively easy to guess what lies between the points as the guess cannot be absurdly wrong (assuming the data is not fluctuating too much). But it will be far more difficult to guess the point beyond the most right and the most left points because there is no evidence as to how they will change.

In terms of flood-monitoring, then, it is difficult to predict long-term flood trends based on the past training datasets because climate change is fundamentally changing the trend of many hydrological factors. We have no acceptable training data in this case.

But the most fundamental difference between AI and humans, I think, is the difference in consciousness, or more specifically, motivation. So far, AI will do whatever the users ask, but it cannot come up with an idea of its own. My two-year-old daughter can easily exceed AI when she says “I want that candy”. She can even improvise by saying repeatedly “I want want that candy” to emphasise her demand. I cannot imagine an AI algorithm that could do anything even close to that. At the end of the day, we need creative solutions, and AI is not capable of providing them.

AI, then, is currently merely a tool to scale up human’s “understanding” and maybe “prediction”. It has a long way to go before it catches up with human thinking, creativity and motivation.

This article is republished from The Conversation under a Creative Commons license. Read the original article.