The new Toyota Supra is set to shake up the sports car market early next year, with 350bhp thrills, a turbo six-cylinder engine, curvaceous double-bubble roof, 0-62mph time of around four seconds and a price tag topping £50,000. If you like compact sports cars and were in the queue for a Porsche 718 Cayman, Alpine A110 or Jaguar F-type, it looks like your shopping list just got a little longer.

Supra is one of the most iconic names in Toyota’s long history and four decades after the first model was unveiled, we’re about to get a new one. Codenamed A90, the new model is a joint project with the forthcoming BMW Z4, and as it nears production, we’re learning more and more about what could be next year’s most exciting sports car.

It’s no secret that BMW and Toyota have teamed up to create the new Z4/Supra platform, and the reasons behind the collaboration are largely financial. It’s a reflection of a shrinking global market for sports cars that two giants of manufacturing are teaming up to get the efficiencies of scale required to get the project off the ground.

However, it appears that the initial desire to save costs and share parts meant the joint project got off to a less than ideal start. ‘We started discussions with BMW saying “Let’s increase the amount of shared parts, let’s make everything efficient” – that was the starting point,’ explains Tada-san. ‘It didn’t quite match, and there was one instance where BMW came up and said – what do you want? It seems like you’re making compromises for the sake of efficiency.’ 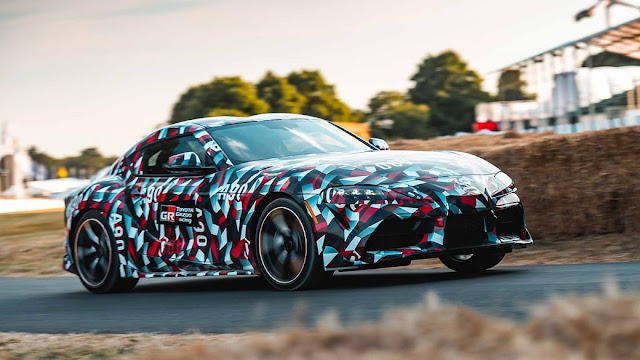 After that, Toyota and BMW began to develop the individual cars they wanted, and then looked for common areas where it made sense to share hardware. Our spy photos reveal the latest look at the new 2+2 sports car, as engineers hone it before final sign-off.

There won’t be as many parts shared as you think; we’re told that the new Supra now only shares six – six! – components with the Z4. There’s the engine and transmission, just the door mirrors and two others parts that are common between them.

Okay, we’re being generous by swallowing the engine being one component line – but both camps are adamant these two cars are not merely badge-engineered sports car twins.

The Supra shares the same engine and transmission as the latest BMW Z4, so expect a range-topping turbocharged inline six generating a rumoured 330bhp and 450Nm (or 332lb ft) coupled to an eight-speed automatic transmission. We’ve seen the new the Z4 snapped in development with a six-speed manual, but CAR understands it’s unlikley to make it to production at this stage. Shame.

The Z4 will be manufactured in Austria by Magna Steyr at its Graz production facility – the go-to overflow release valve when car manufacturers can’t squeeze a new model into their existing factory network. The Supra will be built at a Toyota factory, CAR understands. 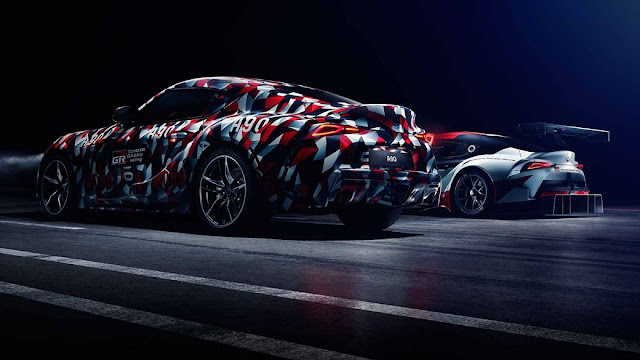 Rumours suggest that the Supra will feature a mixture of four- and six-cylinder BMW units, mostly turbocharged and available with dual-clutch transmissions. This suggests they might launch with a toppy six-pot, and then grow sales and/or stretch the range with four-cylinder engines in due course.

An interview with Toyota chief engineer Tada and Japanese magazine Info Seek, claims it almost certaintly won’t. When asked in spring 2018 if the new Supra would be coming with a manual transmission, Tada replied: ‘At the moment, it is not; it is just a dual-clutch transmission.’

Tada goes on to say that’s partly because the new car could produce too much torque for a manual gearbox. A manual gearbox could however appear on the more hardcore GRMN version of the car that are in the pipeline. 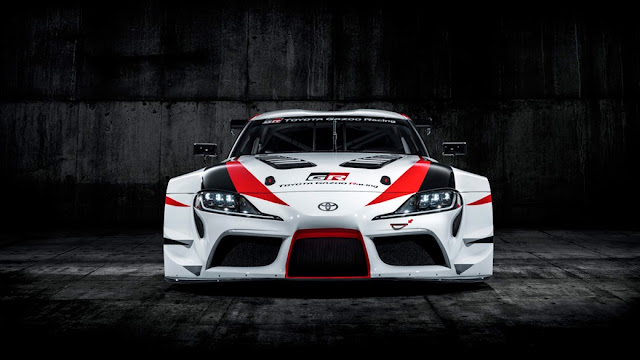 First hinted at with the  FT-1 concept, and then again with the Supra Racing concept (above), the general look of Toyota’s next sports car is already out in the open. But at Le Mans, we dug out more insight into how it was designed. And it seems certain to continue the wide rear beloved of the earlier four generations of Supra (the last model was the A80, paving the way for the new 2019 A90 Supra).

‘We wanted to make it so at a glance you recognise it, so we went through many discussions with the designer of the car and this is how we came up with the design,’ says Tada. ‘There were some focal points or cues of the design taken from the previous Supra. For example, the rear fender, where we had that kind of volume; we said that’s the sexy part of the design, so we tried to have some cues.’ 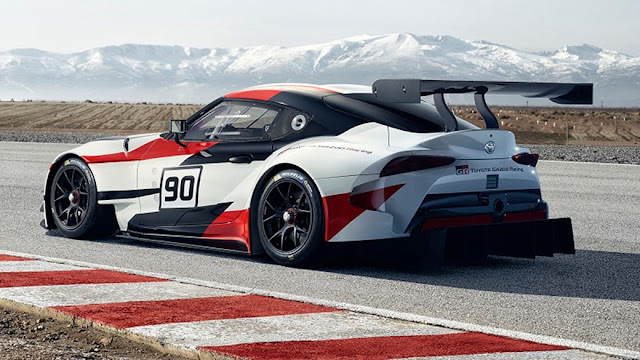 Dimensions of the Supra have been leaked online and, if accurate, suggest a size of:
The Supra is already shaping up to be a high-performance sports car, but Tada confirmed a GRMN model will also be on the way – eventually. Expect the sort of tweaks we’ve already seen on the Toyota Yaris GRMN but turned up to 11, and coming a little while after the standard production car.

Toyota Supra specs and trims will look like this:
(Article Source: carmagazine)