Intel authorities are affirming that the organization’s initial 10-nanometer server processor will dispatch in 2020, with two more 14nm chips coming to showcase amid the following two years.
At the chip merchant’s Data-Centric Innovation Summit Aug. 8, Navin Shenoy, official VP and general chief of Intel’s Data Center Group, revealed a Xeon guide that shows 14nm Cascade Lake chips being discharged not long from now, trailed by the 14nm Cooper Lake contributes late 2019 and the 10nm Ice Lake processors in 2020.
New data, be that as it may, has now surfaced, we as of have now said that Intel is to present “Whiskey Lake” (otherwise known as Coffee Lake Refresh) in the not so distant future, on the work area side of things. 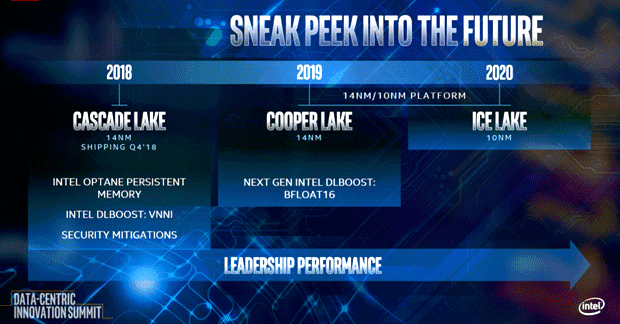 Practically, the littler the processor parts, regularly the more risky the assembling procedure moves toward becoming. We’ve seen that previously, and it appears to apply to complex 10nm plans in their yields, e.g. delivering a higher number of blemished chips per wafer. Strangely enough, 14, 12 and 7nm appear to go solid. AMD is on track with 7nm for ZEN2.
On the work area side this year Intel will keep on focusing on 14nm based processors of which the original was discharged in 2014. Before the current year’s over, Intel’s fifth and last age 14nm innovation based CPUs ought to be presented, which are code-named Whiskey Lake.