A powerful magnitude 7 earthquake has hit the Indonesian island of Lombok. A tsunami warning was issued in its aftermath but it was lifted several hours later.

The US Geological Survey said the quake, off the north coast of the island, struck 10km (6.21 miles) underground.

It comes a week after another quake hit the island killing at least 16 people. Lombak is a popular tourist site for its beaches and hiking trails.

There were no immediate reports of casualties, but officials urged people to move away from the ocean.

Please go to a place with higher ground, while remaining calm and not panicking,” Dwikorita Karnawati, head of the Indonesian Meteorology Agency told local TV. 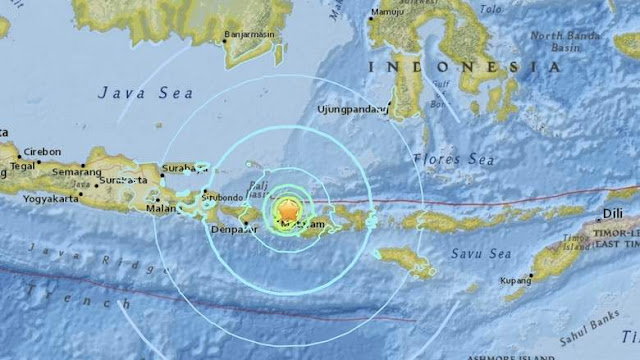 The tremors prompted a large-scale evacuation of a nearby volcano.

However there were no reports of damage and the operator of the island’s airport told Reuters it was operating normally.

The quake was felt for several seconds in Bali, where people ran out of buildings.

“All the hotel guests were running so I did too. People filled the streets,” said Michelle Lindsay, an Australian tourist in Bali told Reuters news agency.

Last week’s earthquake stranded more than 500 hikers on a mountain in Lombok.

A major rescue operation was mounted to get them to safety.