Two goals from @ECavaniOfficial means that it is @Uruguay that will face #FRA in Friday’s quarter-final in Nizhny Novgorod!#URUPOR pic.twitter.com/JA1dcK4ghM

Defeat for the European champions finished Cristiano Ronaldo’s hopes of success in Russia just hours after Lionel Messi and Argentina were knocked out, beaten 4-3 by Les Bleus.

This World Cup has not been short of stunning goals and Cavani added another to the collection when he opened the scoring early on, playing a superb one-two with Luis Suarez before thumping home a header from his strike partner’s cross.

Uruguay had not conceded a goal at this World Cup before Pepe rose unmarked to nod in an equaliser from close range, prompting a brief spell of dominance for Portugal. 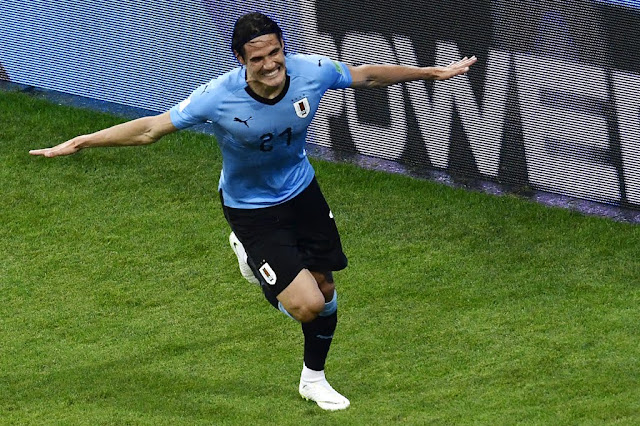 (image source : business recorder)
But Cavani secured Uruguay’s place in the last eight – and a trip to Nizhny Novgorod to face France on Friday – when he steered a brilliant shot beyond goalkeeper Rui Patricio.

Uruguay made a slow start to this World Cup by scraping past Egypt 1-0 but have got stronger with every game – and in Suarez and Cavani, they possess one of the most potent strike partnerships in Russia.

Exquisite technique, timing and teamwork were all present as the two combined to score a goal inside the first 10 minutes that few sides at the tournament would have been able to prevent.

Cavani – hugging the touchline on the right wing – hit a brilliant crossfield pass to Suarez wide left. The Barcelona forward held the ball for a moment as Cavani powered into the area before whipping in a cross for his strike partner to head home. Of Cavani’s 45 international goals, Suarez has now assisted 12 of them.

It is, however, a partnership that could be disrupted. After scoring his side’s second with a clinical finish on the counter, the Paris St-Germain striker left the field, appearing to clutch his hamstring.

A serious injury for Cavani would undoubtedly be a blow but this Uruguay team is arguably greater than the sum of its parts. Against Portugal, they looked well balanced and while they did concede, it was the first goal against them in 597 minutes of football, a run stretching back to August last year.

Ronaldo scored four goals to take Portugal through to the last 16 almost on his own, but once again was unable to continue that form beyond the group stages.

The Real Madrid forward had failed to find the net in his four previous knockout games and never really troubled Fernando Muslera in the Uruguay goal on Saturday evening.

He did not have a single touch of the ball inside the area in the first half while his only shot on target in the entire game came in the second minute, when his low effort from distance was straight at Muslera.

Ronaldo will be 37 by the time of the 2022 World Cup in Qatar, meaning this could have been his last appearance on the biggest international stage.

“Cristiano still has a lot to give to football and I hope he will stay to help the young players grow and develop,” Portugal coach Fernando Santos said.

We have a team with many young players and of course we all want him there with us.”