FIFA World Cup 2018: Uruguay 3 - 0 Russia | Uruguay Is On The Top In Group A - Insight Trending
Skip to content
News

Russia’s impressive start to the World Cup took a downward turn as they had a man sent off and were easily defeated by Uruguay, whose victory means they top Group A.

There was a party atmosphere around the scorching Samara Arena before kick-off, with fans having travelled from all over the country keen to share in the good feeling surrounding their national team.

Russia had scored eight goals in sweeping victories over Saudi Arabia and Egypt and were already guaranteed to progress, but they went behind in their final group match after only 10 minutes when Luis Suarez drilled in a clever low free-kick.

It got worse for Stanislav Cherchesov’s side when a Diego Laxalt effort from 25 yards was deflected in by Denis Cheryshev, leaving his keeper Igor Akifneev stranded and in the position of having conceded three goals at the tournament without making a save.

Akinfeev did then come out to block a Rodrigo Bentancur chance, with Roman Zobnin just scrambling the rebound clear of Edinson Cavani, before Igor Smolnikov picked up a second yellow card and was sent off 35 minutes into his World Cup debut.

After the break, Russia’s 10 men composed themselves and at least managed to wrest back some control of the match, with Uruguay always looking dangerous but perhaps happy to concede possession and protect their lead.

The hosts were rewarded with their best chances of the match, the first to Artem Dzuba, who fired wildly over the bar from inside the box, the second by Fedor Smelov, who dazzled to find space in behind the Uruguay defence but failed to pick out a team-mate with what looked to be an easy cut-back.

But the final word was left to Cavani, who put several earlier misses behind him to get his first goal of the tournament by stabbing in from close range after an Akinfeev parry, ensuring Russia finished as runners-up.

Both teams will find out their last 16 opponents later this evening, with Uruguay set to play the Group B runners-up, and Russia the Group B winners.

Second-placed Portugal face Iran, who must win if they are to reach the knockout stage for the first time in their history. 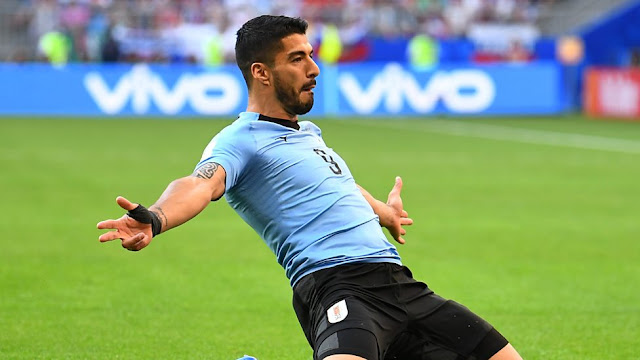 (image source : BBC)
There was very little doubt about who would win this game after an early period in which Russia were blown away.

Suarez looked determined to impress after his poor opening match against Egypt, and it was his clever low free-kick that set the tone for what was a very comfortable victory.

There was plenty of noise from the stands – so Uruguay goalkeeper Fernando Muslera will have had many quieter games in terms of volume – but he had little work to do as he became his country’s all-time leading appearance maker at the World Cup.

At his 14th match at the tournament, and on the occasion of his 100th cap, Uruguay simply out-performed Russia, and of course were for much of the game a player better off.

There was even finally a goal for Cavani right at the end. For a long time it looked like it would not come as the Paris St-Germain striker endured a mostly frustrating evening.

He missed three good chances before finally things fell into place as the rebound from an Akinfeev parry landed kindly at his feet.

The Uruguay fans stayed long after the final whistle to cheer their team. For them it is three wins from three, but their next match will be a much more serious test.